Airway assessment and/or correction is ideally performed at the time of desexing. There are two reasons for this; firstly, it costs significantly less. Secondly – and most importantly, the palate has had time to grow to it’s maximum length, reducing the chance of needing a second surgery (which is extremely unlikely), with reduced chance of secondary changes having occurred such as everted laryngeal saccules and redundant pharyngeal mucosa. You may wish to read more here.

If you haven’t already booked in for our no charge Bulldog education seminars and are looking into desexing your bulldog, now would be an ideal time to do so. 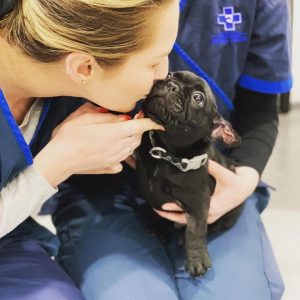 Castration is one of the quickest and simplest surgical procedures in dogs. Put simply, a single incision is made just in front of the testes. Both testes are pushed forward and removed through this single incision.

The testes normally are held in place by a membrane called the tunica. Incising through the tunica exposes the spermatic cord and blood vessels which are then double ligated (or tied up) with dissolving suture material. Once the testes are removed, the tissue under the skin is closed with dissolving suture material and the skin is closed with non-absorbable sutures that need to be removed in ten days’ time.

Surgical complications are very rare and the operation (in normal circumstances) takes five to ten minutes and pets recover very quickly. Pain relieving and antibiotic injections are given at the time of surgery and ongoing medications are not needed. Patients are recovered and running around the next day.

Female speys are more complex than male castrations and can take anywhere from fifteen minutes for a normal puppy, up to an hour for an obese, mature or on-heat dog. Thankfully, complications are very rare and recovery is quick. Some patients may still be a little slow the following day but should be 100% by day two.

Unlike castration, speying an animal involves entering the abdominal cavity via an incision made in the midline of the belly. The initial incision is usually small and approximately two centimetres long. The main body of the uterus is then located and brought forth using a spey hook, (which is a surgical instrument designed specifically for this purpose). By following the uterus forward, the ovary is then identified and exposed. The ovarian ligament is found under the ovary and carefully broken to allow greater exposure of the ovarian artery, which lies deep in the abdomen. Once identified, this artery is double ligated (or tied up). This is the delicate part of the operation because it is crucial to tear the ligament carefully so as not to damage the artery; and then correctly ligate the artery so that excessive bleeding doesn’t occur. In large-breeds, deep-chested or overweight dogs, this can be quite difficult and sometimes the abdominal excision needs to be extended in order to gain greater exposure.

This procedure is repeated on the opposite ovary and once both ovaries have been detached, the two uterine horns are traced back to the uterine body. This too is double ligated and the entire ovarian-uterine unit is removed. Hence the spey procedure involves a full ovario-hysterectomy.

As for castrations, analgesic and antibiotic injections are given at the time of spey surgery, and no ongoing medications are needed. Most patients are up and charging around by the next day (or at least by day two).